History of our Church

The Catholic church began in Sidmouth with the coming of exiled French Jesuits in 1880. They rented Peak House and almost immediately offered Mass on Sundays and Holy days for the forty or so Catholics in Sidmouth.

In 1881 Sisters of the Assumption moved to Sidmouth and opened their chapel to the public, this being served by the Jesuit Fathers.

The Jesuits left Sidmouth in 1883 as a result the Sisters decided to make a permanent foundation in Sidmouth and soon moved into a purpose built convent. The Chapel celebrated Mass for the first time in 1884, it was opened to the public immediately and served from Bodmin. Some time later a diocesan priest was appointed as chaplain to the Convent, he also looked after the records for Sidmouth’s growing Catholic population.

The Convent thrived as a retreat centre, however, as a result of the first world war many refugees, mainly Belgian Catholics were living in Sidmouth so the sisters decided to build a school to provide a Catholic education. The school prospered for sixty years, however, due to the inability to afford fully qualified Mistresses the Senior School had to close in 1970. Despite the efforts of Sisters, Teachers and Parents the Infant School also had to close and was subsequently transferred to St. John’s School Trust. In 1976 the Sisters left the convent and moved to Rose Cottage, this in turn had to be closed and the three remaining Sisters moved to a convent in London.

In the late 1920’s it became apparent that there was a need for a Parish Church in Sidmouth. In 1928,Father Power was appointed the Parish Priest . It was his persuasiveness and drive that bought the land in Radway for a Church and Presbytery in 1930. Over the next five years funds were raised so that building could start in early 1935. The church was completed in November of the same year, the first Mass being celebrated on 10th November. At this time a curate was appointed to assist the Parish Priest in supporting the Convent, Schools and Parish.

To herald the Twenty First century a new window was designed for the Lady Chapel showing members of our community reaching out to Jesus through Mary, our Mother. 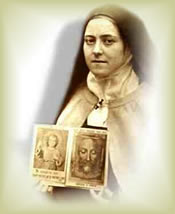 Our Church Hall is dedicated to Saint Therese of Lisieux pictured left.

St. Teresa’s Church Hall is on the corner of Connaught Road and Vicarage Road, some 200 yards from the Church, and is available for hire by adults over 18 years of age. The Hall is licensed for music, films, plays etc. and has a maximum capacity of 90 persons. It is not licensed for the sale of alcohol. Full details and further information can be obtained from the parish office or from Ann Faherty, 01395 579414.

We use cookies on our website to give you the most relevant experience by remembering your preferences and repeat visits. By clicking “Accept All”, you consent to the use of ALL the cookies. However, you may visit "Cookie Settings" to provide a controlled consent.
Cookie SettingsAccept All
Manage consent

This website uses cookies to improve your experience while you navigate through the website. Out of these, the cookies that are categorized as necessary are stored on your browser as they are essential for the working of basic functionalities of the website. We also use third-party cookies that help us analyze and understand how you use this website. These cookies will be stored in your browser only with your consent. You also have the option to opt-out of these cookies. But opting out of some of these cookies may affect your browsing experience.
Necessary Always Enabled
Necessary cookies are absolutely essential for the website to function properly. These cookies ensure basic functionalities and security features of the website, anonymously.
Functional
Functional cookies help to perform certain functionalities like sharing the content of the website on social media platforms, collect feedbacks, and other third-party features.
Performance
Performance cookies are used to understand and analyze the key performance indexes of the website which helps in delivering a better user experience for the visitors.
Analytics
Analytical cookies are used to understand how visitors interact with the website. These cookies help provide information on metrics the number of visitors, bounce rate, traffic source, etc.
Advertisement
Advertisement cookies are used to provide visitors with relevant ads and marketing campaigns. These cookies track visitors across websites and collect information to provide customized ads.
Others
Other uncategorized cookies are those that are being analyzed and have not been classified into a category as yet.
SAVE & ACCEPT